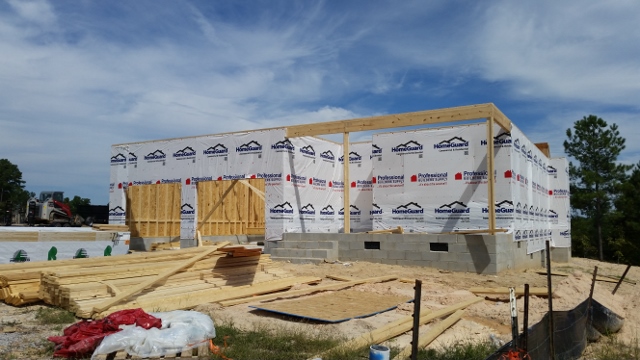 On September 16th, I drove over to Rolesville on my lunch hour to see if anything was going on at our job site. I did not expect to see the first floor framed in! Walking through it was surreal. Looking at the plans is one dimensional, but when I walked in, it was almost like a 3D video game. I walked into another realm!

And at our next visit after this, we were pleased to see trusses and a second floor!

Soon after this, at a “state of the house” meeting we had with Ryan, things went better than imagined. He had questions, I had answers. I had questions, he had answers—and suggestions. It was a great meeting. Several things were clarified, a couple of things were adjusted, and some decisions were postponed. In the meantime, more meetings were scheduled to make selections. Granite and lighting decisions must be finalized as we attempt to stay on budget. Our timeline is tight, but still doable assuming we don’t make a lot of changes, things come in on time, inspections go well, and we don’t have bad weather. Fingers crossed.

Ryan followed this meeting up with a 4-way phone call with Stacey, Kevin, and me to be sure we were all on the same page. We confirmed the range hood with Kevin, we’re going to meet Stacey to finalize faucets and lighting, and Ryan is confirming the meeting with trades for next week. It is very nice to not wonder what’s going on.

At our meeting with Stacey at Carolina Plumbing Supply we learned that choosing faucets and fixtures is not easy. Or cheap. It’s very easy to blow the budget, especially if you’ve been saving things to Pinterest under “can’t live without”… yes, yes you can…once you hear the price. I did splurge a little on the tub and the kitchen faucet, but the master bath shower system is still in limbo. Next, we went to the Home Center in Apex to revisit lighting packages. I selected Minka-Lavery Overland Park collection, and we’ll most likely look for some fun pendants for over the kitchen island. And speaking of the island, we both loved the Level 2 Ashen White granite, which is $1,200 over our allowance. We agreed to scale back to a Level 1 selection that we could “live with.” I picked New Venetian Gold from the Level 1 options. That was at noon. By 8:00 that night, I was so uncomfortable with the change, that I talked with Richard and Stacey and we all agreed that the Ashen White was perfect and that we should get what we want. It is a splurge worth every penny. We can change a light fixture here and there but we will never change out the granite. I’m much happier with this decision.

By the end of September, things were really taking form. All the rooms, closets, and even the fireplace are framed! And our screened porch was becoming a reality—its vaulted ceiling is now visible and we are going to love it! I wanted our friend Chip Haver, a general contractor and remodeler, to look at the house and let us know what questions to have ready for an upcoming meeting with Ryan. Our confidence in Ryan and ICG Homes was already solid, but Chip reinforced it as we walked around during this visit. On his way out the door (ok, door frame), he said, “you guys are in good hands.”

Ryan’s team is “heads down, get it done, what’s next” each and every day. I almost sent him a text asking him when the windows would go in. But, I exercised extreme self-control and was waiting to ask at our next meeting. Lo and behold, they are in! It is now September 30th and we have windows!